The Vinyl Word - Little Feat - Down on the Farm

Discover Little Feat and Down the Farm, the album completed following the death of frontman Lowell George.

"We were driving down the New Jersey Turnpike in this bus and we stopped at this pizza joint off the highway. Everybody in the band shared a cheese pizza but Lowell bought a large pizza with everything on it, carried it to the back of the bus, and he ate the entire pizza by himself. He died two or three days later."

These words, spoken by guest guitarist on Down on the Farm and future permanent member of Little Feat Fred Tackett, paint a picture of Lowell George's final months on Earth. An over-indulgent lifestyle of binge eating, alcohol, and cocaine finally caught up with the 34-year-old leading to his premature death in June 1979.

However, before that there was a career which led to Jackson Browne labelling George "the Orson Wells of rock". Discover more below!

Born in Hollywood in 1945, George's first forays into a musical career saw him form unavailing The Factory and join Frank Zappa's Mothers of Invention as a rhythm guitarist and vocalist.

George was fired from Zappa's band, some sources argue for smoking marijuana, whereas others suggest Zappa thought George was too talented and should form his own band, yet George himself says it was for writing 'Willin' - a song about 'dope'.

Together, the foursome delivered their debut eponymous album in 1971 and followed it up with their second studio album Sailin' Shoes the following year. Both records were reviewed well yet lacked any real commercial success and as such, the band split up.

However, the same year as their sophomore album, Little Feat returned with a new line-up. George, Hayward, and Payne were joined by Paul Barrere (vocals/guitar), Sam Clayton (congas) and Kenny Gradney (bass) to form what is now referred to as Little Feat's classic line-up.

Not only did the band gain a reputation for their high energy live performances, aided by their high-profile opening spot for The Who's North American tour, but they were also relentless in recording. Dixie Chicken (1973) is a huge cult album of the 1970s, often turning up in lists of best albums of all time, and Feats Don't Fail Me Now (1974), The Last Record Album (1975), and Time Loves a Hero (1977) all charted inside the US Top 40.

Down on the Farm

Despite the band's apparent successes, Lowell George was beginning to become disinterested. The band had taken a jazz fusion turn, and tensions over musical direction began to arise amongst George, Payne, and Barrere.

While recording their seventh studio album Down on the Farm, George was also touring his debut solo album Thanks, I'll Eat It Here, a now rather ironic title if I refer you back to our opening quote from Fred Tackett.

George mentioned in interviews that Little Feat would be disbanding, yet he would be keen to reform the band without the aforementioned members in an attempt to reassert his control.

However, George was not to be given this chance. Midway through his solo tour, George collapsed in his Arlington, Virginia hotel room of a heart attack and was pronounced dead.

The band saw no reason to discard the half-recorded Down on the Farm. A brief mourning period was followed by the album's completion and release just five months after George's death and became their highest charting effort reaching number 29.

Despite commercial success, the record bombed with critics. Whilst the album does demonstrate straightforward musical direction, there's an obvious southern rock twang referred to as 'swamp rock', Little Feat were clearly suffering in the creativity department by the time of their seventh effort.

Referred to as "not terribly memorable" and "lacklustre", the main attraction to the album comes from: 1. The story of George's mid-recording death and the troubles that existed within the band, and 2. The distinctive artwork.

You're making a southern rock album, what do you put on the cover? If you said, "a seductive duck painting her nails by the pool whilst a tiger lounges in the background" you would be absolutely right.

The cover of Down on the Farm is one of a number of collaborations between Little Feat and artist Neon Park. Birth name Martin Muller, Neon Park was an American artist and illustrator who worked with musicians, such as David Bowie, Frank Zappa, and the Beach Boys, as well as the likes of Playboy, National Lampoon, and DreamWorks. 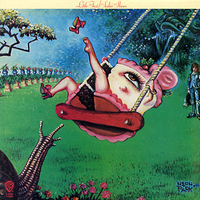 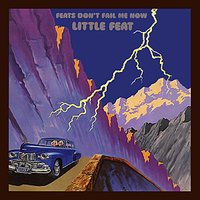 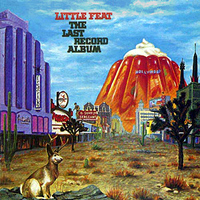 Park came into contact with the band by total chance, picking up a hitchhiker, Ivan Ulz (AKA Ivan The Ice Cream Man), who was going to a party at Lowell George's house.

This particular piece takes inspiration from Gil Elvgren's 'The Finishing Touch', with the pose, nail painting, and butterfly chair all shared.

It's relevance to the album is somewhat distant, if not completely non-existent. "Where and how Neon came up with the idea for a duck doing her nails by the pool is anyone's guess", says Paul Barrere, "but it made perfect sense to us".

Neon Park sadly passed away with ALS disease in 1993, with the band releasing Live From Neon Park in his honour in 1993.

With Park's work, a fairly bland album has become a collector's item. Working with acrylic paint onto a Masonite board, Park creates a vivid and intriguing piece that is sure to jump out when browsing record stores.

A double album compilation, Hoy-Hoy!, filled with live tracks and outtakes marked the break-up of the band in 1981. The members embarked on varying musical journeys with solo albums, session works, and touring roles throughout the 1980s, working with the likes of Robert Plant, Jackson Browne, Stevie Nicks, The Doobie Brothers, and more.

With a few other line-up changes along the way the band have released nine studio albums since Down on the Farm, with their most recent record 'Rooster Rag' released in 2012.

Among their plaudits however, Jimmy Page noted Little Feat as his favourite American band, and Jackson Browne's 'Of Missing Persons' (1980) memorializes George. Likewise, 'Ride Like the Wind' (1979) by Christopher Cross is dedicated to George.

George's daughter Inara George seemingly inherited her fathers musical talent and is now one half of duo The Bird and the Bee.

Little Feat never recaptured the spirit of their 1970s work. Down on the Farm is a stunning piece of work aesthetically rather than sonically and future release never encapsulated the talent Lowell George displayed when forming the band.