An Interview With... Point Valaine

All you need to know about the indie-rock of German four-piece Point Valaine!

Recently, we spoke to Point Valaine, a four-piece from south Germany who combine their early rock influences to create contemporary indie, fused with pop tendencies.

2019 EP Mandrakes is the most recent music available from the lads and is the perfect introduction to the bands impressive range. Opening with atmospheric 'The Gathering', there are clear punk influences before the band explode into all out indie rock tune 'Longview', which bears a riff carrying the nostalgia of noughties brit rock.

'The Wonder of the Stars' and 'As if You Didn't Care' present the listener with a more moody, melancholic, soundscape, before EP closer, 'Seabeds', demonstrates Point Valaine's obvious talent. A mellow acoustic effort allows soaring vocals take centre stage in an emotionally ambient track that highlights the bands ability to create on a deeper level.

Find out more about Point Valaine below!

We are Jonas, Pete, Frank and Björn, a four-piece band called Point Valaine and we are from the south of Germany. We all live close to Heidelberg and Karlsruhe. The name Point Valaine is taken from a Noël Coward stage play.

Our music is shaped by a lot of older and newer rock groups. It could be described as melodic, melancholic and folky, but it's also influenced by 90s guitar-pop and post-punk bands. We all have a broad taste in music and were born in between the end of the 70s and the beginning of the 90s - we're pretty sure that this contributes to the variety of sounds and styles of our songs. But we still try to make our records sound like contemporary pieces, not vintage in a way Franz Ferdinand or The Strokes did it with their early ones.

Jonas: When I was three years old, I loved to sing to 'I can't dance' from Genesis! I think I was at the age of 13 when music became an identity-creating attitude, particularly through Nirvana. Today I am also working in musical therapy, so music is a big part of my life.

Pete: I started to listen to music with Iron Maiden and Slayer in the 80s. When I grew older, I moved from metal or punk to indie and alternative and started playing guitar in different bands - from death or goth like early Paradise Lost to indie pop later. Four years ago, I started building my own record studio and in the meantime, I also record other music acts.

Frank: I went through early music education thanks to my mother who is also a musician. In elementary school I was annoying everybody, because I was drumming with my pencils on the desk all the time. When I was 10, I finally got my first drum set so I was able to practice at home.

Björn: In my case it is very similar, my father was a music teacher, and I was able to try all instruments in the school where he was teaching. For me trying new things was the most interesting part of making music. I did not like studying just one instrument for four hours a day, I also loved playing around with synthesizers and so on. I also played in bands from very different genres, from grind-core metal to indie rock.

Jonas: Like I already said, a big influence was Nirvana, but later I was also impressed by Joy Division, Sonic Youth, The National, Slow Dive, Grizzly Bear, and The War on Drugs.

Pete: Like I said, it all started with Iron Maiden, Slayer, Metallica, and Black Sabbath. Later on, Smashing Pumpkins, Weezer, Jimmy Eat World and other stuff became important.

Frank: My first rock album was 'Best out of Hell', a 'Bat out of Hell' best-of by Meat Loaf. My father gave me that album, because he thought that I was developing a bad music taste. *laughs* Later on System of a Down, Foo Fighters and Red Hot Chili Peppers were the biggest influences.

Björn: I also heard a lot of Nirvana and fell in love with the whole Seattle Grunge rock scene. Another big influence was The Cure and David Bowie. I liked a lot of metal bands when I was younger, then I started liking more brit-pop and US post-hardcore stuff.

Pete: David Bowie, Mogwai and in the meantime also a lot of pop. And Bon Iver, Dinosaur Jr. - it is all very diverse! *laughs*

Frank: The Goo Goo Dolls, Mumford and Sons, Twenty One Pilots and Grandson.

Björn: Right now I am listening to the Black Country, New Road debut album, it sounds really fresh compared to everything else that came out recently. Laura Carbone released a great live album on vinyl last week, she is from the same town where Pete and I are from. Highly recommended!

Somebody told us once that it is interesting how different we all are and how well it fits together, when we are on stage when we form one unit. Maybe this describes it the best. In sum we are a rather introverted band.

Frank: Also worth mentioning when talking about what separates us - I have a glockenspiel on stage. *chuckles*

Hopefully, we will be back on stage, soon. We cannot wait to write new songs together and have rehearsals. We only met via Zoom during the last months. Last summer we had to cancel all our shows. So, the plan is to continue where we left off and play some rock shows! 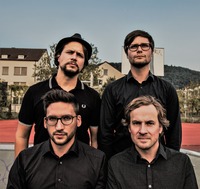 The eclectic mix of influences garnered by Point Valaine leads to an intriguing yet inviting sound that can take off in any direction. It has been over a year since there was new music from the band, so hopefully we don't have to wait too long before they can get back together!

Want to write for us or feature on our site? Get in touch!